As I am busy painting my first Highlanders for the Royalist Army, I thought I would add a short post on the Stettin Print of 1631. The print, made from a woodcut, is important because it is one of the few contemporary illustrations of highland soldiers dressed in highland fashion of the time. It is also one of the earliest depictions of recognizable highland attire in Scotland, such as kilts and tartan.

The print shows four scottish mercenaries in the service of the Swedish King Gustavus Adolphus during the Thirty Years War. The fortified town in the distance is thought to be the Baltic town of Stettin (Szczecin) mentioned in the header, and from where the print gets it's name. Stettin is located in Northern Poland near the modern German border.

The heading above the print reads in German "Irish Soldiers In solchem Habit Gehen die 800 In Stettin angekommen Irrlander oder Irren" which translates "The 800 Irish, or fools, that have arrived in Stettin are marching in this habit (clothing style)". Although the author called these soldiers Irish, they appear to be scottish highlanders. It may be that the highlanders use of the gaelic (Irish) language led many germans to believe they were Irish. Their clearly different appearance to contemporary lowland scots, also serving in Germany in lage numbers, may have added to the confusion. Note the pun in the headline, where the word "irren", meaning fools or those who are in error, is used as an alternate word for the Irish. "Irrlander oder Irren" = Irish or numpties. Thanks to Anonymous for pointing this out in the comments section below.

From left to right a description of each figure:

In the near distance is a regiment of highland soldiers wearing plaid. This is also contentious as it is believed most scots mercenaries would have been (re-) clothed and (re-) equipped in a more conventional manner for the german wars, although there are references to units of "red-shanks" (bare-legged) highlanders in Germany. Regardless of how they dressed once established on the continent, or how quickly highland attire was abandoned, these prints give a rare insight into the highland dress of the time.

The original print can had some accompanying written description. 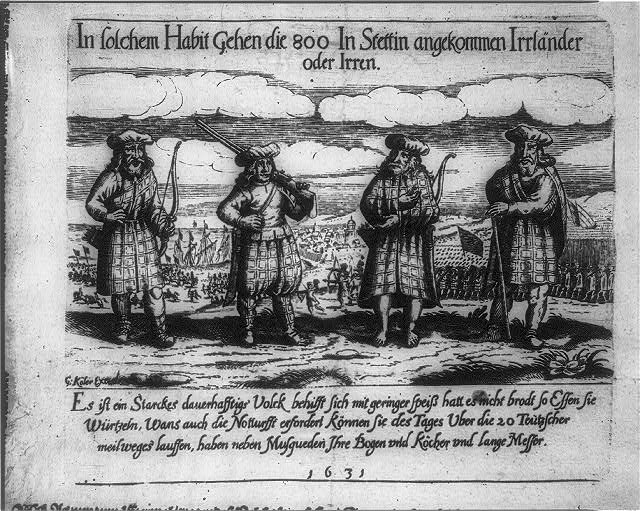 The german text immediately below the illustration reads:  “They are a strong, hardy race, contenting themselves with little food, if they have no bread they eat roots and carrots; in case of necessity they are able to walk twenty German miles in a day; they have besides muskets, their bows and quivers and long knives. 1631” 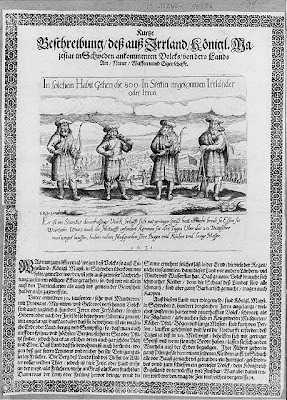 In addition to its value to the historian, the text on this broadside contains a few nuggets for both the war-gamer and the modeller/painter, on the fighting prowess and hardiness of the highlanders, as well as their appearance. But reading it, you can't help but feel a little sorry for the poor burghers of Stettin, who on top of the hardship of war, are descended upon by a horde of bare-arsed, whisky swilling cheuchters...

"In these latter wicked days among other calamities - God has inflicted this upon us - that foreign nations interfere with us, increase from day to day, desolate our fields, lay waste our land, and commit great and shameful sins. More especially they impose this retribution upon our a-la-modish people, many a-la-modish folk, quite unknown before, now invade our country to avenge our a-a-modish sins. Great numbers arrive from distant Ireland, called Hibernians from that Island. This people are hardy and strong, dark-coloured like Gipsies, short in stature, eager to fight, furnished with muskets and quivers, skilful in the use of bows and arrows ready, to cut their way with long knives, they run fast so that they can make sixteen miles a day. Their clothes and caps have a barbarous appearance almost all black, all their sheep being as is well known, of a dark colour; their shoes are chiefly made of and tied on with bark of trees. They make shift with little food; if they have no bread and are hungry they dig roots out of the earth, with which they are easily appeased. Because, then, God has sent such people into our land on account of our great sin and shame, let us cease from sin, that he may again take pleasure in us, and restore peace to the land, and every one may follow his honest calling."

There is another surviving German broadside, also from 1631, with a very interesting woodcut which shows "Der Irlander" (an Irishman - but most probably a highlander), "der lappe" (a Laplander), and "der Finlander" (a Finn). This is basically a small sample of the terrifying, strangely clad northmen that descended on Germany for the wars. 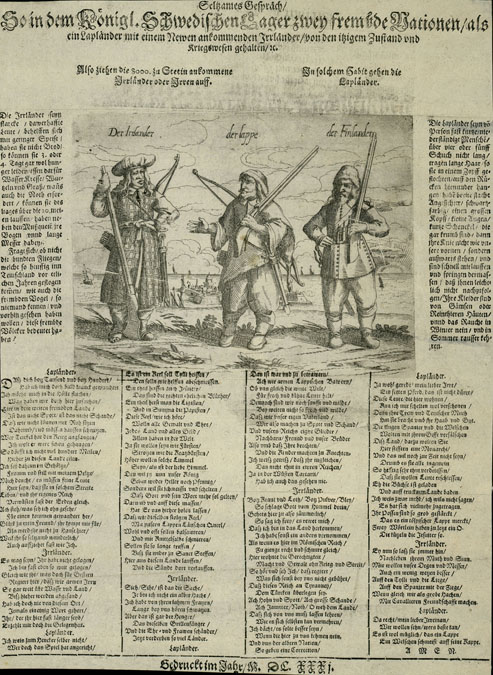 However, what is most interesting about this woodcut, is the way the highlander is clothed. A close-up of the scot shows he is wearing a sleeveless tartan long coat. A garment that is clearly not a belted plaid. Now it is always possible that the artist copied figure (1) in the Stettin Print and propagated what could be an error, but with the detail in this print, and the seemingly large numbers of highlanders that were around, I reckon the artist was drawing exactly what he saw.

The sleeveless tartan long coat is closed to the front, belted with a cloth or scarf, and worn over a shirt. Unfortunately it is difficult to tell if he is bare-legged or wearing trews under the coat. I suspect that trews were worn with this garment for warmth as there is not near as much cloth in this coat as there is in a full belted plaid. This well armed chap is carrying a musket, longbow and quiver, and a dirk or short-sword. And of course the outfit is completed with an unfeasibly large Scots (blue) bonnet.

These prints were the principle reference I used to request the range of 28mm English Civil War Highlanders that were produced through the Eureka 100 Club back in May of 2007. The figures can be seen on the photos of articles on highlanders (see labels) on the blog. They have also inspired a couple of Osprey artists including Angus McBride (Highland Clansmen, Warrior 21) and Graham Turner (Scots Armies of the English Civil Wars, MAA 331), both of whom include a highlander wearing sleeveless long coat in their illustrated plates.

I would love to see a photograph of a re-enactor wearing one of these sleeveless tartan coats. If you come across one, please let me know via the comments below.

Would the Germans of the time be able to distinguish between Irish and Scottish Gaelic? I can't, can you?

Scottish and Irish Gaelic are really similar - both have the same root (the Gaels). Welsh, Cornish and Breton are all Brythonic (Pictish may also have been this).

I have the same problem with Americans calling me Irish, Australian etc. :-)

James I of Britain referred to the Hebrides Scots as the Irish of Scotland. They saw themselves as Gaels thus cultural kin of the Irish. But if you had a list of names that would tell you the area they are from, i have read there is a list somewhere and the names are distinctively Irish rather than Scots but we know there whrere Scots aswell, so which group does this show? There is an overlap of clothing styles and plaid (tartan to modern folk) was extensively used in Ireland and Scotland. My grandfather could have a conversation with a Scot Gaelic speaker, I couldn't as the languages are slightly changed now, so its more difficult. I wouldn't be surprised if these guys where from Gaelic Irish of Ulster (modern Northern Ireland or modern counties of Donegal, Monaghan or Cavan in the Republic of Ireland)the Gaelic Irish wore the bonnet (baraid = beret/cap)and it is referred to in historical text. They also used the Skeen = scian (long knife)also mentioned by De Grouz in the 1640s trip to Ireland, "which have a blade of 21", and they can throw most adroitly at 30 paces", they all wore a brat (mantle or large cloak)i will check this quote, but it was considered a Gaelic weapon.

Sean, Many thanks for your comments. I think you are right. Both on the notion that highlanders were considered a breed apart by lowland scots, and that they would have been difficult to distinguish from Ulster lads.

Irish as a term was used to describe all 'Gaels' in throughout much of the 17th Century. Ditto with dialects of Gaelic, all called Irish or Erse, by outsiders, regardless if it were 'Irish' or 'Scottish.' In the 16th Century, the Elizabethan English would some times qualify Scottish Gaels as 'Scots-Irish.' this circa 1550, etc., there was a conflation of that term in the late 1800s, but that is another story. Nice illustrations you posted.

Unless I'm mistaken, the Gaelic language was known as "Erse", which basically translates as "Irish". As well as this, many of the "Schottenkirche" which are in Germany and Austria were actually founded by Irish monks, so the confusion is not surprising.

Most people miss the joke at the end of this headline. "Irren" means fools, idiots, strange people. The short form of the word for "Irishmen" has only one 'r': "Iren".

Hello I am new to this so I will keep it brief Do you think that they may be Irishmen, but they are dressed like that as they may be from some of the clans that both Ireland and Scotland Also think that who drew and wrote about the soldier would have asked where they were from he named them Irish.

It's difficult to tell, as the idea that the Scots wore only tartan by this time, while the Irish only wore saffron is more of a contemporary assertion than historical fact. Both sets of Gaels, Irish and Scottish wore whatever was useful, although this image shows a predominance of tartan. Yet it specifically says "Hibernia". Could it be that the illustrator knew their geographic origin? Or was Hibernia presumed over Caledonia? The Irish also wore caubeens, the same kind of hat as the Scottish (blue) bonnet. Is there a regimental unit number which is known for these mercenaries? Note too the three crowned flag, which is probably Swedish, but might also be the flag of Munster, Ireland.

The Marquis of Montrose 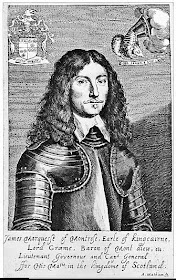 James Graham, the King's Lieutenant-General in Scotland from 1644 until 1646

The Earl of Loudon 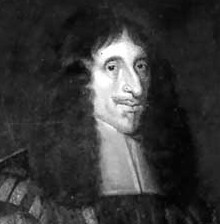 John Campbell, opposed Charles I and was rewarded in 1641 with title of Lord Chancellor of Scotland

The Marquis of Argyll 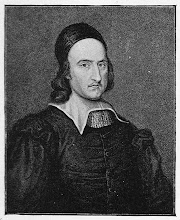 Archibald Campbell, enemy of Montrose, staunch covenanter and de-facto ruler of Scotland during the Civil Wars

The Earl of Antrim 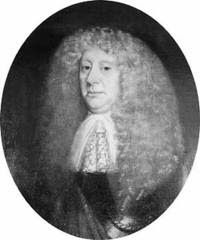 Royalist Randal McDonnell was on the council of the Irish Confederacy in 1644, and provided the 1600 Irish mercenaries under Alasdair Macolla. He was made Marquis in 1645. 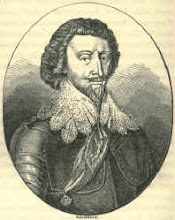 George Gordon, staunch royalist, but no friend of Montrose. His sons fought for Montrose in 1645.

Professional Scottish soldier and veteren of the Thirty Years War. Commanded Covenanter armies at Alford and Kilsyth. Was captured at Preston.

Copyright © Walter Morrison & Roy Fitzsimmons
Permission to use content published on this blog can be requested by contacting us via the comments box on the appropriate blog post.